The Railgun is a Crafted Part in the Weapons category. 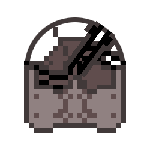 The Railgun is a fast shooting, low damage weapon that rapidly shoots projectiles of Rock at enemies. Unlike other ranged weapons, the Railgun is limited to shooting in a 180 degree arc in front of it. The speed and range of the Railguns' projectiles depends on the force of the steam pushed in from a Boiler, higher power boilers like the Superheated Boiler result in a faster projectile. Railguns also cannot be manually controlled, and must have Control wired in from a lever. A standard Railgun must have Rock available as ammo to fire.

The Railgun has one Augmentation.