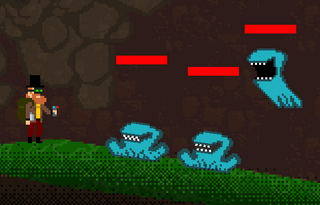 A group of 3 Frogs aggravated at the player.

The Frog is a hostile Mob in Mechanic Miner.

The frogs are found in the mines of the Marsh. There's usually a bunch of frogs together with a Frog Leader.

Attacking or nearing the frogs will aggravate them, and cause the whole pack including the Frog Leader to attack you. The frogs move slowly, but because of it's jumping movement it's able to climb smaller vehicles.

Upon killing a Frog you will be rewarded with some experience. In addition you'll have a chance of receiving the following upon harvesting the corpse of the frog: