Belt is a crafted part in the Circuits Category.

A faded white and shuttle grey band looped around an axis, can be seen over any structural block 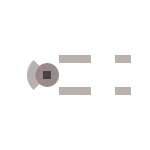 Belts transfer kinetic motion generated by Engines or other moving parts. Belts can branch off each other allowing for multiple parts to be connected to one line. Unlike Couplings, Belts cannot create free moving bearings on Structures, however, Couplings with already created Bearings can support free-moving Belts. All belts are fully animated and spin with the motion of its driving force. Belts do not collide with Structures. Belts do collide with terrain.

Belts are used to power many machines that require kinetic motion. Belts are the primary transference device for kinetic energy of all motorized parts of Mechanic Miner vehicles. Bearings made with Couplings or Flux antenna can be motorized by connecting a Belt to the Bearing

A valid connection is one where a Belt connects to the desired load [1]and its Engine or Driving force.

An invalid connection is one where a Belt does not attach to the intended Load or its Engine.