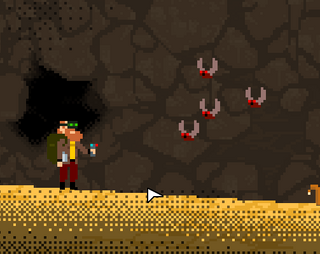 A group of bats diving in to attack the player.

The Bat is a hostile Mob in Mechanic Miner.

The Bat is one of the most common mobs in Mechanic Miner and can be found in most caves.

The Bat hides in a hole in the cave wall. Once nearing the hole, the Bat will give a warning sound, after which it will attack if the player does not leave quickly. The Bat does not deal damage to vehicles or structures, and deals low damage to the player. The Bat cannot leave its' hole if it is obstructed by an enclosed interior. If a nearby Wrot uses it's 'Lift' ability, nearby Bats will flock around the Wrot in an attempt to protect it from damage. If the player retreats far enough from the Bats' hole, the Bat will stop chasing and will instead go back to its' spot.

Upon killing the Bat you will be rewarded with some experience. In addition, the player will receive the following upon harvesting it's corpse: