The Ballista is a Crafted Part in the Weapons category. It is sometimes erroneously referred to as the Crossbow. 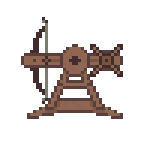 The Ballista is the first weapon available to the player at the start of the game. It is a simple weapon that deals moderate damage with a moderate fire rate. A Control connection can be wired into the ballista to control it from a lever without needing to move to the ballista manually, and allowing the player to shoot multiple at once. Since V0.3.0, Ballistae as well as other weapons are capable of damaging the vehicle they are mounted on, meaning players must place their Ballistae carefully in such a way as to not damage their own vehicle. Standard Ballistae consume Wood with use.

The Ballista has one Augmentation.