The Aeolipile Engine is a crafted part in the Engines category. 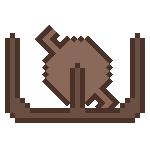 The Aeolipile Engine is the Engine available to the Player at the start of the game. When provided Steam from a Boiler and given control through a Wire, it can spin clockwise or counterclockwise to produce rotational energy output onto Belts. An engine not receiving control will automatically brake to counter any rotational force on it's output Belt. Stronger Boilers can allow the Aeolipile Engine to produce more torque but will not increase maximum speed, letting it cope with heavy loads better. It has much less torque and speed than the Iron Engine, but this can be useful if the player does not wish a contraption to spin at high speed.

The Aeolipile Engine has no Augments.

Community content is available under CC BY-NC-SA 3.0 unless otherwise noted.